hey all!
i have a confession to make - i'm already a bad blogger. in my first week.
i'm already forgetting to take pictures! i was doing so well too.

so, today i am going to exercise my literary voice and thrill you guys through the written word. deal?

yesteeeddaaayyyy - i had the BEST food today, and wish i had good pictures!
here's first breakfast: 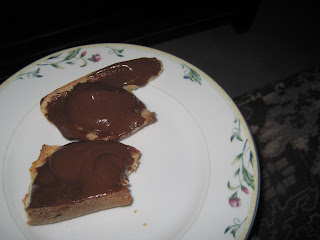 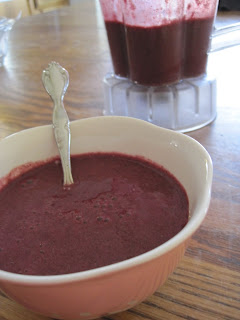 i did a quick back, lower back, and abs strength training sesh, followed by a little biking workout (to stretch from monday's killer lifting).
second breakfast: blueberry/raspberry/flax smoothie.... om nom nom. then i grabbed a handful of slivered almonds on the way up to shower.
i did well until this point. mom and i went to tjmaxx looking for her china and then to whole foods for lunch (!!!). i even got excited about getting to take food bloggie pics at wf but i forgot to! mom and i were chatting too much.
buutttt - i had the vegan black bean soup (my fave!) and some roasted curried eggplant and tomatoes. heaven.
for second lunch i had a whole wheat wrap the size of my head stuffed with the last of my roasted veggies from sunday. booooooooooo i hate it when i eat all my good food. i poured about half a bottle of salsa in with it. for good measure and stuff.
i also roasted quinoa to add to my sister's gluten-free granola, but forgot to take pictures, obviously. it was pretty good, but i need a dehydrator (helllooo manufacturers? help a sister out!??). i have a growing list of things i want to put in there (that's what she said).
and because clearly you guys don't know what my salads look like, here you go. more pictures. 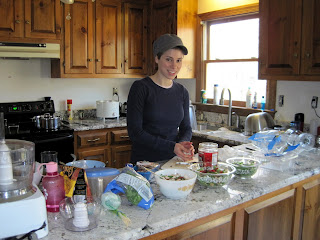 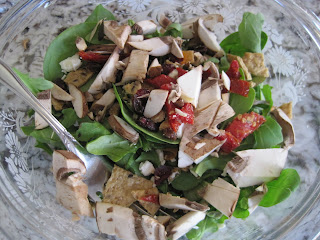 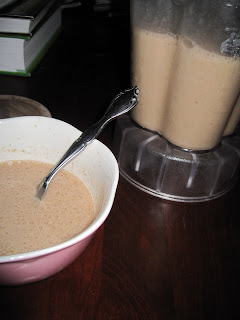 ok. so i had a dilemma. after my salad i was full, but i hadn't eaten near enough calories (for more on this, check out yesterday's post). so i waited a few hours, and made myself a peanut butter banana smoothie. still hadn't had enough, but i was closer, and did something good for my body.
and for today's goodies: 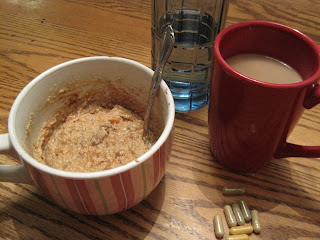 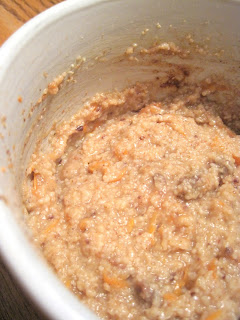 - carrot cake oat bran! very kath of me, no? it was heaven! 1/3c oatbran, water to cover, grated carrot, and two chopped up fig laraballs (instead of raisins - i like figs better, and hello they had cashews in them!). after cooking i mixed in some cinnamon, vanilla, nutmeg, and ginger. oh babyyy.
- i was still INCREDIBLY sore today but had planned on jogging some (trying to get back to running in time for spring weather!). i ended up walking and jogging intervals while talking to my buddy zach.
when i go home, i ate the last half of the pear from the other day, even though it was brown. kinda glad i didn't take a picture of this one.
question time! do you guys ever eat something even though it looks gross? what?
i usually don't eat pasta in public for this very reason... except I'M the one that looks gross, not the pasta! 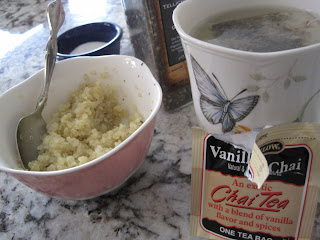 - after my shower, i ate some quinoa i made yesterday with s & p, along with my new favorite tea,
bigalow's vanilla chai tea.
DRINK THIS!!! it tastes like graham crackers and vanilla ice cream.... but it's tea! apparently they have vanilla caramel, and i'm not sure how i don't own ALL the boxes of that. like last year.
ANYWAYS
- then i went to chipotle for lunch with a friend.

cred: chipotle website
i was super honored because he asked me to do a little nutrition consultation with him. how cool is that? sometimes i feel frustrated because nutrition is one time i know the answer to questions people have, but i don't want to step on anyone's toes, so i sit quietly (WHEN I COULD BE HELPING!!). not that i know all the answers, but i am passionate enough to find the answer if i don't!
and yes, i'm aware i forgot to take pictures. but it's ok, because as much as i adore chipotle, today i wasn't thrilled with what i ordered. honestly, i think it's because i'm so spoiled by my salads that nothing else measures up.
do you guys have something you crave you can make better at home?
- i had the veggie salad with black and pinto beans, roasted veggies (which were AMAZING!), and two salsas, over romaine.
- when i got home, i had a veggie wrap for the 1039840234th day in a row, but i added in trader joe's raw almond butter. i LOVE this stuff!
i'm trying to eat a lot more raw foods since i've cut out meat, and this stuff is the best. anyone else eat nut butter with veggies? AND the jar is almost empty so i can officially be a blogger and make OIAJ!
- since you guys know what oats look like, i didn't take a picture of my second bowl of oatmeal for the day, but can i just say how AMAZING IT WAS?!?!?!?!?!?!?!?!?!?
i am in the middle of transferring to mostly plant-based eating right now, but i was really craving egg, and i hadn't had any in days. i just used 1/2c rolled oats, pinch of salt, pinch of stevia, shake of cinnamon, and added in a serving of liquid egg whites, and holy cow it was bangin!
FOODIE REVIEW: KIRKLAND SIGNATURE

from costco website.
i can't believe i'm saying this, but i never liked the trader joe's egg whites. they just kinda held my veggies together in my omlette. no flavor or texture, really.
BUT THESE BABIES ARE HEAVEN.
really. i added them to my oats and it was the BEST oats i have ever had. ever. and i've eaten a lot of oatmeal! they are thick and creamy, and have the richness of egg yokes. even though they aren't. strange.
stats:
Serving Size 1/4 cup (2oz)
Amount Per Serving
Calories from Fat 0
Calories 30
% Daily Values*
Total Fat 0g 0%
Saturated Fat 0g 0%
Trans Fat 0g
Cholesterol 0mg 0%
Sodium 115mg 5%
Total Carbohydrate 1g 0%
Dietary Fiber 0g 0%
Sugars 0.5g
Protein 6g


i often add egg whites into my oats after cooking to add protein without fat before my workouts, but this took it to a new level. i want to eat this everyday.
vegans, any help here? any alternatives?
as of right now, that's all my eats, but i'm getting sushi tonight with a beautiful friend of mine, so you know they'll be more!!!!
i hope you guys enjoyed your day, and here's my questions again:
1) do you guys ever eat something even though it looks gross? what?
2) do you guys mix nut butters with veggies/savory foods? or just with fruit and toast?
3) vegans/vegetarians, how did you guys go through your transitions? what were your challenges?

Posted by Rebekah (clarity in creation.) at 4:50 PM