first, i wanted to let you guys in on some things i had been thinking about randomly:
1. i am still really unfamiliar with blogger. please pardon my ignorance.
2. i haven't felt super the last couple days, so i have a few pictures, but not many.
3. i just got my computer fixed and back from the shop (i had been using my mom's) so i messed with my pictures on my edit software. so no, i don't normally photoshop my food :)
4. i have been reading a book called "Foods That Fight Pain" by Neal Barnard, M.D., so i will give you guys a little review in the future.

OK - the eats!
here's the deal with the eats. the meals i've eaten at home this week have basically all been the same... so i'll save you guys scrolling through 1098403 of the same pictures of oatmeal. basically, every day i've eaten oatmeal, a salad, a wrap, and some other stuff i took pictures of. so i've eaten more than what i put up... i just wouldn't insult you guys like that!


I DIGRESS. without furthur ado - 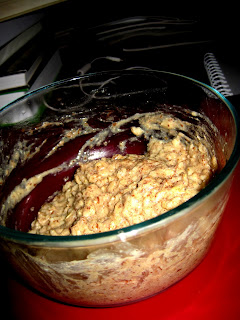 cinnamon caramel oats... made like wednesday's with egg whites. heaven!
then i was off to the gym for my last day of the week! it was a full body day, and it's safe to say now my FULL BODY feels it :) 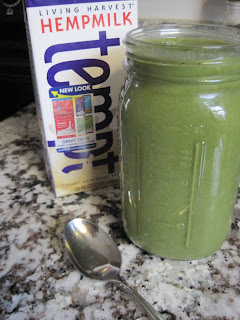 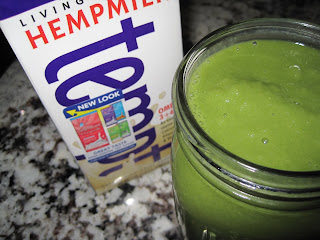 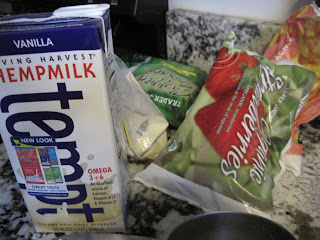 again... any of you guys use hempmilk!? love it! i got it on sale at kroger for $1.99.
that's all the eats i have from yesterday (told ya it was a bad day.) i also ate amazing black bean soup, one of my kitchen sink salads, MORE oatmeal, an apple, and veggie wrap. i didn't take pictures 1) because i didn't feel like it, and 2) because you guys have seen them before!
and p.s. - i'm avoiding dairy because i think i'm sensitive to it... but last night i hadn't eaten NEAR enough calories, and i didn't feel like eating anything, so i kinda made myself eat something (check out the bottom of this post). i ended up eating reese's ice cream because i had craved peanut butter, but it was GROSS. i think i've lost my sweet tooth, which is helpful in avoiding sugar :)
on a more positive note, here's today's eats.
brekkie - i made an sweet-egg white burrito (wrap, egg whites, vanilla extract, stevia, pinch salt, cinnamon), but was so hungry i didn't take a picture. which is just as well because it looked gross... but tasted OMGGG.
a bit later, i made some cookies as a thank you to a friend of mine. he lent me his stephen king book "under the dome." it was pretty good! dark, but good. he is a creative writing major at vcu and wants to do a guest post soon! (he's also a closet foodie!)
BANANA-WALNUT (OR PEANUT) CHOCOLATE CHUNK COOKIES
(recipe courtesy of martha stewart, my changes in italics)
Makes about 3 dozen
i have no idea what the junk i did to formatting of these, but here they are. 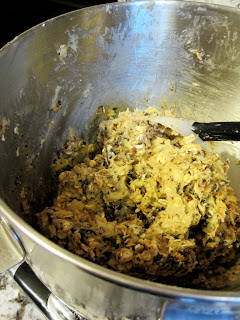 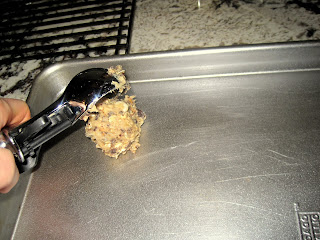 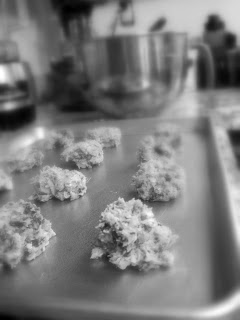 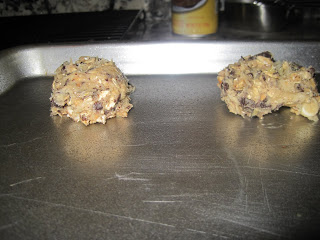 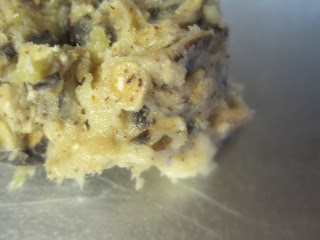 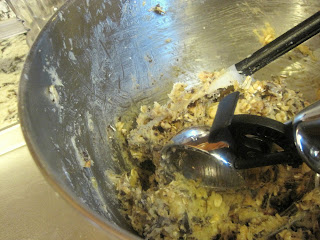 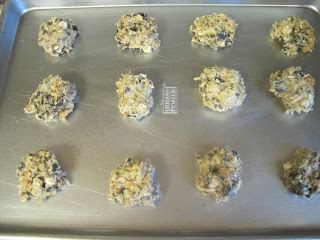 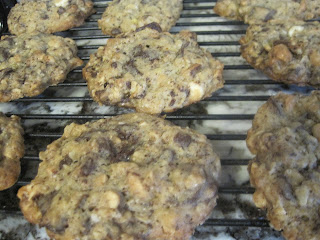 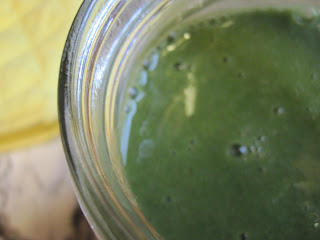 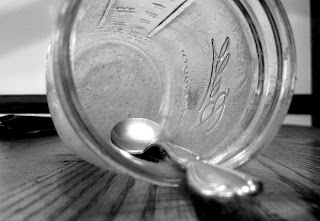 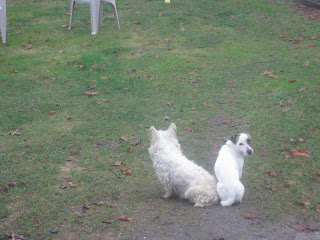 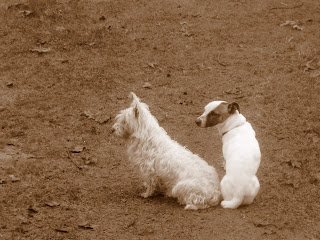 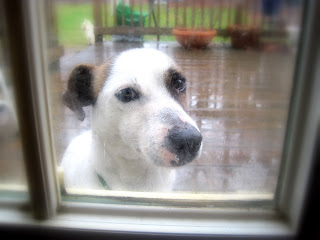 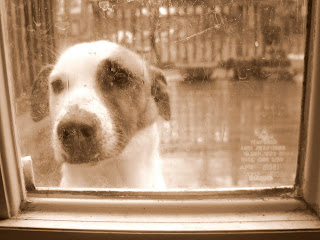 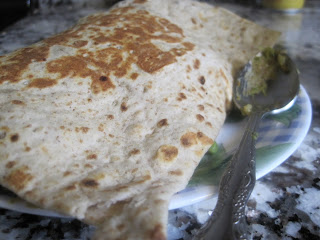 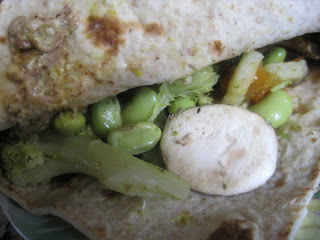 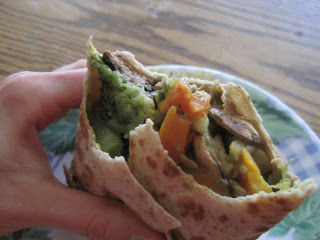 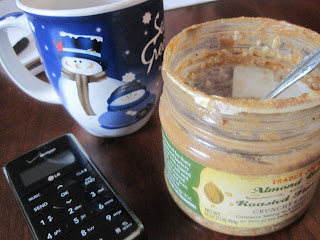 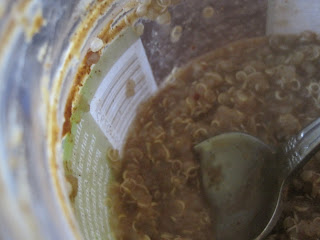 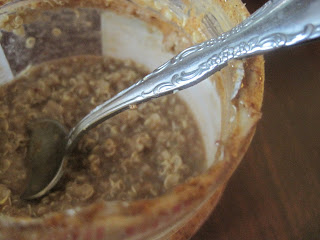 OK AFTER ABOUT FIFTEEN MINUTES I GIVE UP ON TRYING TO FIX THOSE PICTURES!!!!!!!!!!!!!!!!!!!!dsakfoisa;hdgoiadslgjdsfljgakdsjgoiaewjgfoasldgakdsfg
- gahh ok so the green juice is my second breakfast today (just like yesterday's but with lime juice and ginger grated in it, and hemp protein instead of hempmilk)
- the dogs are my dogs! they were being cute and i had my camera out after the cookie photo shoot. the white one's karie, and the jack russel is dudley.
- the wrap had leftover veggies from the fam's dinner last night (i added curry powder) and raw almond butter... i'm really on a nut butter and veggie kick :)
- i had an unpictured apple, then i made................
QIAJ!
for those of you familiar with the food blogosphere, you know all about oats in a jar (OIAJ) like here, here, and here.
well, i know you'd never know it by my last couple day's eats, but i actually have a food sensitivity to oatmeal (i get a BIT!!!1!!!11!!! bloaty/crampy). sooooo we had leftover quinoa in the fridge, and i used it like oats. bonus - way more protein! with my new thing... vanilla chai :)
personal -
on a different note, i thought i needed to give you guys a heads up. since my fibromyalgia diagnoses, i have gone from training for the richmond half-marathon, to plenty of days i don't get up much. i'm figuring out how to cope with it, but i still really struggle with my appetite. since i was so sedentary for a few months, obviously my metabolism slowed down a lot, but i also lost a lot of weight - fast. i know most of it was muscle. now that i'm working out again, i keep losing weight, but my appetite hasn't come back...


so my question is -
for you athletes, do you eat a lot more on your workout days than rest days?
and everybody,
what do you do when you know you need to eat, but aren't hungry at all?
it didn't used to be this bad, but today i had NO appetite and barely had eaten anything. i made myself QIAJ, which is delicious, but I DIDN'T WANT TO EAT IT. period. i actually started crying because i wasn't hungry and was so frustrated. thanks for listening, and i appreciate you guys' input!
- rebekah
Posted by Rebekah (clarity in creation.) at 3:39 PM