hey buddies - happy sunday to ya.
everyone have some good weekend time?

i finally got the baking bug again! someone's been inspiring me to get back into the kitchen and create... the point of my blog, yes?

i made heaven on a baking sheet.
no, seriously.
i made baking illustrated's thick and chewy triple-chocolate cookies for the men in my life, because i'm awesome like that.
and i have a 16 yr-old brother who would start gnawing my legs off if i didn't keep a steady flow of pizza and chocolate headed his way. add the boy's sweet tooth on top of that, and i'm in danger! 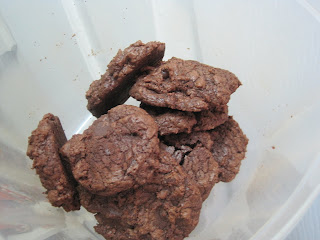 hubba hubba.
if i were a blogger with a brain, i would have taken a picture before they made it into the tupperware.
sigh.
these were the best of both worlds - chewy texture like a cookie, but an intense chocolate hit like a brownie. and i wonder why... they had over a POUND of chocolate in the recipe!!!!! holy crap. 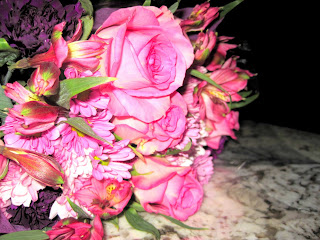 i will repeat... MAJOR points.
why flowers? just because. i'm a BIT lucky.
(sidenote: the boy has put up with my shenanigans for about 8 months now... where does time go???)

as i said the other day, ipanema is an adorable little restaurant downtown near some other lovely ladies. located underground, nestled beside a tattoo shop, and across the street from a north african boutique, it carries it's own atmosphere, to say the least! the servers are all super friendly, the owner's usually hanging out, and the menu is awesome!

total foodie paradise.
when i was first trying to cut out some animal products, i had no idea what i was doing, and my server really helped me pick something to try. he basically let me create my own salad, and on top of that, it was HEAVENLY!

once again, if this blogger had a brain, i would have pictures of the inside and my dinner...
except as soon as they bring out the food, all thoughts of the blog leave me, and all thoughts turn to the belly! oops...
i got the hummus sandwich with oven-roasted tomatoes, sprouts, cukes, and garlic hummus on sourdough bread... food 'gasms, no?

hello stand-in. lookin' good!
it came with a side salad with the MOST DELICIOUS carrot-ginger dressing i've ever tasted... must recreate this! it also came with sweet potato fries.... i was in ecstasy. i'd marry those darn fries if i could.
the boy got the Miso and Mirin Glazed Salmon with wasabi potato cakes, chinese broccoli and apple slaw. also 'gasmic, i'll add.

i would definitely get both again!
miss katharina recommended the pies from here, too. i haven't had room for dessert yet, but next time you'd better believe i'm gonna try!


... annnnnndddd i was going to post the rest of my weekend, but my computer froze and now my pictures won't load.
anyone else ever have this problem?
i'll try again later today, but i just have to rant a little about something that happened this week.

thursday, i had a follow-up endocrinologist appointment. i've been in and out of their office for the last four years or so trying to figure out my freak-of-nature hormones. i'm gonna be open and honest with you guys, ok?
if you're a bit leary of tmi, i'll see you later at my next post :)

basically, i've never had a normal period. i didn't start until i was almost 17, i've never had a regular cycle, and they've put me on and off the pill for years to try to get my body to "figure it out." so here i am at almost 21, and STILL have no normal cycle. i actually haven't had a period in months... years if you don't count my issues on the pill.
cool, you say?
sorta.
i got diagnosed with polycystic ovarian syndrome (PCOS) when i was 17, which isn't life-threatening or anything, but is pretty weird for someone like me (young, active, no family history, etc.). it also means i am predisposed for troubles getting pregnant, and am in danger of developing insulin resistance (remember my post earlier this week? it's from my heart. please treasure your bodies!).
i'm not nervous about it, but i would like to figure it out now while i'm young and don't have to deal with those problems yet... thus, the doc appointment.

i'm pretty upset, though,
not because of the PCOS, but because of how the doctor responded. i've been to a few different doctors about it, but this was my first time seeing this specific doc. he basically wanted to know everything about me (amazingly, he didn't fall asleep!!!), which was all well and good, until he asked me about my weight loss.
it's a pretty normal question for the doctor to ask, but he was totally shocked to hear that i've lost 50lbs since high school. i know it's dramatic, but i wasn't healthy before, and the weight certainly wasn't helping me, mentally or physically. it was lost over the course of 3 or 4 years, and i NEVER dieted. it was lost through exercise, learning nutrition, and overcoming emotional eating.

instead of seeing this as positive, or at least considering that it might have been for a good reason, the doctor immediately starting asking me if i was purging.
i know that it was a plausible question considering my health right now, but i couldn't help but get offended... i've worked SO hard all these years sweating my rear off on the treadmill, resisting all-you-can-eat dessert bars, and preaching nutrition, and now my doctor is doubting my credibility because i've lost the weight. he thinks i'm just depressed.
i'm finally not overweight, exercising right, and eating a diet full of delicious food, and now i have to defend myself???

y'all, i'm not trying to criticize those with ED.
PLEASEEEEE don't get me wrong - i've definitely had disordered thoughts in high school (who hasn't??), so i know it's not like only crazies experience it. with the way people are now, i'm surprised some of you guys have come out unscathed! mad props.
i am totally heartbroken, however,
that my doctor doesn't believe anyone can lose weight healthfully and naturally anymore. and that he started to dismiss me because i'm not heavy, so i must self-induce vomitting. i've actually been really focusing on eating enough recently. i'm lifting weights again, so i want to feed these new muscles!!

so forgive me, but i just wanna shout:


my name is rebekah, and i believe in what real food can do for your body.
i will NEVER binge and purge because i believe god designed a perfect plan for our bodies to be healed and sustained through whole foods he made.
also, my body is sacred!
i will treat it like it deserves.
fibro might challenge it, but i will fight back with a gentle, healing hand.
I WILL NOT despair and short-change my health because of body-image.
I WILL stand strong, proud, and healthy as an example to those around me.
i love my body because it is my most precious gift.
have you guys ever experienced something like this?
am i just being dumb?
as someone who's struggled with her weight most of her life, this is a new experience for me.
i don't want to be offended because he was just trying to do his job, but what does this say about the body image and health of young girls now?!?
-r
Posted by Rebekah (clarity in creation.) at 8:31 AM