patience through the process.

hello? anyone still out there?


if you're here reading after the last... um, interesting 48 hours, hey! i'm glad you're here! source.
gf update: i'm on my third day and feelin good! gf is pretty easy for me because of my little sister's celiac, but i did sorta sigh when mom pulled out homemade whole wheat bread from the freezer today.

i'm making a new recipe for gf teff bread this weekend, so keep your eyes peeled! i'll probably get off my lazy butt and make wraps too, but don't hold your breath :)

and tonight, i get an awesome early birthday present of going to dinner with brittany of eatingbirdfood! we're getting sushi to celebrate my 21st birthday (on the 22nd)... yes blogworld, i will finally legally be able to buy Kahlua for making desserts! i see an obsession building.

just a quick thought for today...
how many of us have decided on a whim to change something in our lives, only to end up failing, feeling guilty and defeated?

we plot to overhaul things like our diet, exercise habits, or organization with a spur of the moment decision. we put our heads down, work crazy-hard for a week, then run out of steam, finally caving in. we kick ourselves, feel worthless, and vow to do better next week. sound familiar?

this seems pretty frequent around new years, not to call anyone out... :)

but why does this cycle keep happening? after thousands of failed "i'll start on monday" diets in my teens, you would think i would have conquered this mindset, right? i realized when i transitioned to eating animal-free that i might not be as tough as i thought i was!

i was totally taken off-guard when i struggled at first with my new lifestyle. i just didn't get it: i am fearless! i have willpower out the wazoo! i am a nutritional solid rock! i'm laughing now because it's so ridiculous i felt this way, but really, i did!

i'm not sure why i was shocked - it's a HUGE change! but yet, to say i was shocked would be an understatement. once i woke up, chilled out, and started loving myself, i realized two things:


lifestyle changes aren't about willpower, and we approach them all wrong! 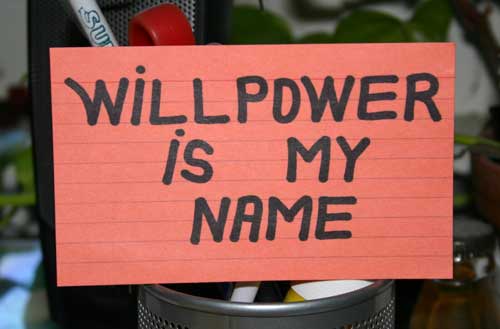 source.
i think it's important to ask yourself why you're approaching such a dramatic change. are you unhappy with who you are? are you missing something? are you empty? why?
"i need to lose weight" doesn't count. why do you need to lose weight? "i need to exercise more" is good, but what's your goal? "i should go vegan" is pointless... because why?

this is not the place to shrug off the tough questions. dig deep! let your mind wander, and be honest with yourself. change shouldn't be for someone else, from pressure, or out of anger. if you don't really know why you're doing this, it can't be that important to you.

without an answer, you have no real motivation. if your motive don't come from the heart, you won't be successful in the long haul - change requires too much effort without solid convictions!
you don't need "willpower" - you need a reason to persevere. after about two years of soul-searching, i finally had my answers... do you? if not, it's ok! just keep looking.
it's also really important to cut yourself some slack, darnit!

source.
lifestyles changes are a HUGE deal - you're overhauling yourself! we beat ourselves up with so much guilt over "failure" in our diets, relationships, and careers for no reason... so stop it!
if you were to just up and move to a foreign country, you would be more realistic. you would realize adjusting to the culture, language, and schedule takes time, and isn't a simple transition. you'd be more sympathetic, right?

apply this same logic to a transition you've made, or are thinking about making, in your own life. love yourself through the process, and accept that big changes means big challenges. don't let yourself slip into negative self-talk - you're a work in progress!

i should have known that it would take me some time to adjust, but i was almost guilty about the struggles i encountered. i expected easy, instant results - i wanted success, and i wanted it now!


don't do what i did: expect instant gratification.

source.
any serious change will take time, and that's totally ok - it's not a race, silly! if it's truly worth it, transitioning at your own pace is the way to go. just because you aren't flowing seamlessly after 15 seconds doesn't mean you're a failure!
i doubted myself, second-guessed myself, and thought about going back 10,000 times. but continuing to work through a transition means you're making progress. don't give up just because you have second thoughts! that's the hard part... and when motivation is totally key. you see what you're made of during the doubt, you know?
growing as people is a life-long process. we have successes, we have failures... this is normal! just keep getting back up again, and eventually, your new life will become second nature to you. if not, you know it wasn't right in the first place, and problem solved!

have you beat yourself up about a failed "resolution?"
have you made it through adapting to a new change?
-rebekah
Posted by Rebekah (clarity in creation.) at 4:21 PM